Picking up on search my recent theme of religious culturing of the Ipod I came across the Shaspod. Launched in 2005 the ShasPod comes pre-loaded 20GBs of Talmudic lessons and teachings. That is about 7.5 years worth of daf yomi (the practice of reading and studying one page of the Talmud a day) for the technologically "with it" religious Jew. This was the brainchild of Rabbi Dovid Grossman of Los Angels who also has a web site providing audio and visual dowloads of the video texts via his web site DafYomi.com. Version 1.o is currently sold out but it is said that 2.0 will soon be forthcoming.
Posted by Soup Twin-1 at 8:50 PM No comments:

This interdisciplinary conference seeks proposals for papers and panels exploring the ways in which media culture, civic engagement and spiritualities intersect to form practices, discourses and the material expressions of social change. In an era of globalization, the media age has introduced a new set of conditions and opportunities for the nature, practice and integration of spirituality and civic engagement. Increasingly, the concept of "spirituality" has become recontextualized, reinserted and reimagined within discourses about social and environmental change. Integral to this project are the media, which provide salient values and symbols to a synthesis of public and private identities, practices and beliefs. New spiritual sensibilities articulate with new imaginaries of the civic sphere through media culture. Key questions are how and where values, practices and beliefs are articulated as spiritual and socially transformational.

In the interest of bridging theory and practice, we welcome submissions from scholars, activists, NGOs and health, business, and media professionals who wish to engage in an intellectual discussion about the engines of social change and its expressions through media culture and spiritual life. Papers and panels may employ any of a number of perspectives, issues and methodologies including but not limited to the following:

This conference is co-sponsored and presented in association with Naropa University in Boulder, Colorado; The Reynolds School of Journalism and Center for Advanced Media Studies at the University of Nevada, Reno; and The Fred W. Smith Ethics Seminar Series with the financial support of the Donald W. Reynolds Foundation, Las Vegas, NV, USA.
Posted by Soup Twin-1 at 6:59 AM No comments:

Email ThisBlogThis!Share to TwitterShare to FacebookShare to Pinterest
Labels: conferences

My friend Oren (who recently wrapped up an interesting PhD at Hebrew University in Youth and the Internet) gave me a heads up to a new Jewish search engine known as jgog. While it looks similar to the Hebrew version of Google it is a unique Jewish focused search engine started by Israeli programmer Jossi Mor Josef. There has been some discussion online about the filtering mechanism in place in the software allowing some "unorthodox" words or searches to be blocked or re-defined, however most of these articles are in German and Hebrew. So if anyone runs across some more info in English on this site I would love to hear about it.
Posted by Soup Twin-1 at 8:04 PM No comments:

I figured if there were Jewish Ipod applications, there must be a Muslim version as well and my suspicions were correct. The PenMan IQRA'A could very well be called the Muslim IPod. It is the latest in Muslim specific digital technology. Described as a Quran Digital book" it is part digital library part MP3 and video player. It comes a preloaded series of Muslim resources including a recording of the entire Quran, recorded Hadith translations, a Quilba (Mecca) indicator and other Muslim related resources. So you can keep on time to prayers, study the Quran and jam to your fav Muslim Hip Hop artist (BTW--I am currently listening to Outlandish) all with the help of a small hand held device.
Posted by Soup Twin-1 at 8:54 PM 1 comment:

You could skip the Jesus Phone and go for a JPhone (from Jewlarious.com). This definitely made me smile! 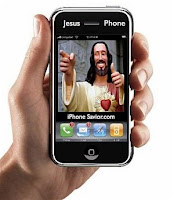 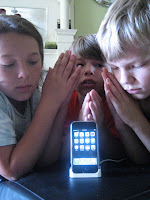 I've been doing some searching online for information on cell phones and religion and I came across an interesting trend...claims that the IPhone has been "dubbed the Jesus Phone by its more blindly faithful users". This metaphor was used by bloggers and then the media in news reports even before the phone was released in July. It evokes the image of Steve Jobs (the president of Apple) as Savior of all our technological needs and the IPhone as god. Some have argued that "Jesus Phone" users are like cult followers exhibiting religious like tendencies, i.e. the cult of Jesus Phone. In news reports religious language is often present, with reporters using phrase such as the "iPhone's divinity", "the messiah of all gadgets" and "the Messiah phone should find itself rich in disciples" are common and a few even provide images that suggest the the cult of mac who may "worship the Jesus phone". Even critiques of the IPhone use religious metaphor and images such as "shares many of the same handicaps that bedevil other U.S. cellular devices"

The IPod as Jesus Phone has arguably been fueled by the reviews and descriptions of the IPhone amongst the blogging community. One blogger has even set up a blog called IPhone Saviour dedicated to the culture and conversation emerging around the new phone using many religious images and heavily religious language. While the significance of this phenomenon is in need of further consideration, it does show the powerful currency religious imagery and language still hold in our media culture.
Posted by Soup Twin-1 at 9:37 AM No comments:

Check this out. You can buy the Chai Pod iPod T-shirt...and download IDaven (Jewish prayers for the IPod) and Jewish users can make their IPod experience "Qof-Dalet-Shin".
Update: On an unrelated note "JPod" is not the name for a Jewish IPod, but the name of a recent novel from Douglas Coupland.
Posted by Soup Twin-1 at 8:51 AM 1 comment:

The IPod "from a biblical perspective"

Stephen G in New Zealand has highlighted a new book relevant to my previous post. Produced by Scripture Union in the UK the book, "The IPod" written by Brian Draper seeks to "explores the impact of the iconic iPod from a biblical perspective, inviting readers to consider issues such as active and passive listening, music as commodity or communion, the fluidity of self expression and the art of silence". SU has a full series of bible studies books called Connect that aimed to encourage biblical reflection for young people on many facets of our contemporary media-techno culture including AI, Computer Animated Films and even Harry Potter. These are great examples of mixing reflection on technology with religious education
Posted by Soup Twin-1 at 4:24 PM No comments:

IPod Culture: Use it, Wear it, Brand It, Sacralize it

My university just announched the launch of the "Fightin' Texas Aggie Ipod", custom-engraved with the Texas A&M University logo. In the last year I have been noticing a lot of IPod related gear demonstrating how pervasive this little piece of technology is becoming in our culture. Marks & Spencers in the UK offers the Ipod suit, for the professionally tailoried tech geek amongst us so no unslightly wires or connector mess up one's dapper look. Of course there is the Nike/Ipod partnership producing running shoes that house a sensor

in you shoe to help you monitor your distance and heart rate via you nano while you run. And is you want to "Tune in to God" you can clothe your Ipod in the appropriate religious cover. I am facinated by the fact that by trends in re-branding a popular brand to make them "our" own. But when it comes to religion and religious communities doing this what message does this send out? Are we tryine to sacralize, re-enchant or proselytize our technology? Does it infer that God has a master IPod? Or...what would Jesus have on his Ipod? (interesting...according to a Beleifnet poll 55% of people said JC would not even own one!)
Posted by Soup Twin-1 at 12:04 PM 1 comment: 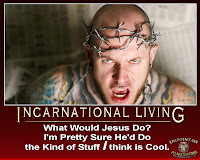 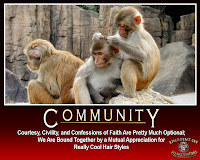 Some of you may have (or have not) seen these....Motivational Posters for the Emerging [Church] [Conversation] Chaos circulating on the web. These in-your-face images are meant to challenge some of the current discourse happening around the Emerging Church. Two weeks ago now I was able to take part in a podcast & online conversation hosted by Tall SkinnyKiwi, aka "Happy Hour with Andrew Jones" at Shapevine, where I and EC-ites debated the reality or not of these images. So I thought I would pass them on, especially for my other research colleagues exploring Emerging Conversation online, it is also a great example of how the web can be used a s a tool for critique and response. Below is an image created by two of t he people involve "Happy Hour" as their response the these images...

At the intersection of Religion & New Media

Soup Twin-1
Heidi Campbell(aka Soup Twin-1) is an American transplant to Scotland for almost a decade, and who was uprooted in 2005 and re-planted in the foreign land of Texas. When she is not teaching Media Studies in Aggieland she can be found in many places around the world researching on religion, new media and spiritual meaning-making in contermporary society.